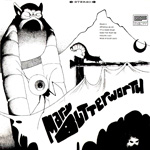 Mary Butterworth LP. Travel back in time to 1969 with our official reissue of one of the most highly sought after west coast psychedelic rock records ever recorded. A heady trip, filled with grooving reverb-soaked jams! Prized original pressings command more than $1000!!

In the tumultuous Spring of 1968, the Mary Butterworth band was formed. Contrary to rumors, the group originated from Southern California and enjoyed being thrust onto the incredible scene that was developing during this remarkable time for music. After a year or so of performing throughout the region in places like the Marina Palace in Seal Beach and others, they decided to record and release a debut album on their own label. In 1969, on a shoestring budget, their album was recorded, manufactured and released. However, the limited pressing was pre-sold to fans and friends only, and never even made it into stores. It disappeared as quickly as it arrived, as did Mary Butterworth, who disbanded not long after the album’s release, never to perform together again.

After a decade or two, word of the album had spread to rabid collectors of vinyl records and late 60s music. Somewhere in Europe during this time, a bootleg vinyl was released and the legend of Mary Butterworth continued to grow, driving the price of the original pressing up into the hundreds of dollars. It would go on to be bootlegged a handful more times in various countries, further driving the price of the original pressing through the roof  and continuing to enhance the reputation of this long lost piece of 60s psych rock history.

Incredibly, in 2003, the original Mary Butterworth song “Feeling I Get” was chosen by director Brian Reitzell as a music selection to be included in the fabulous Sophia Coppola directed film “Lost In Translation”.

Here it is 2011 and Mary Butterworth returns from the past once again, this time in the form of an official licensed, from the master tapes, limited edition vinyl reissue of the impossibly rare and sought after 1969 debut album.

June 2, 2011 theblorg In the Press Comments Off on Jerusalem interview on It’s Psychedelic Baby blog