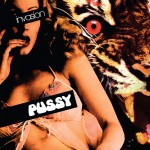 Pussy – Invasion LP. British band Jerusalem is well known among 70s hard rock enthusiasts for their classic 1972 debut album on the Deram label and its recent vinyl and cd reissues. Pussy, also managed and produced by Ian Gillan (Deep Purple), was formed immediately after the breakup of Jerusalem in 1972. Pussy recorded and released one single for the Deram label with the original line-up of Paul Dean, Ray Sparrow and Bob Cooke and went on to record their debut album between 1972 and 1973 with Brian Goff taking over for Bob Cooke on guitar. This album has remained previously unreleased on vinyl until now!

Pussy was formed after the break-up of Jerusalem by its founding members Paul Dean & Ray Sparrow along with Bob Cooke, who was eventually replaced by Brian Goff. They made the decision not to continue with the name Jerusalem out of respect for what Jerusalem was all about at that time in musical history, after all Jerusalem was a one-off moment in time creation and could never be recreated. Although the musical direction of Pussy was very different to Jerusalem, which is surprising as Paul was the main writer for both bands (although his liking for riffs is still prominent in places), they continued to keep that raw, no rules edge which set them apart from many of the bands of the period

After the disbanding of Jerusalem – (the rumors over the years said there was a second unreleased Jerusalem album – this is not true – it was actually the Pussy album) – Decca (Deram Label) decided to continue the Jerusalem contract for Pussy. The first and only Pussy release on Deram was a single entitled ‘Feline Woman’. The recordings found here represent what was to be the Pussy debut album with Brian Goff on guitar plus bonus tracks from the original single and a studio track recorded in 1972 with Jerusalem guitarist Bob Cooke. (sealed, m/m)