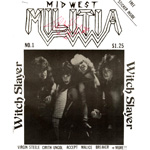 My fascination with music and record collecting began in the mid-70s with Kiss, Ted Nugent, Aerosmith, Black Sabbath, Rush, Judas Priest and the like, my involvement in the music business dates back to about 1983-84 with the first issue of a heavy metal fanzine called “Midwest Militia.” This was a simple underground fanzine, inspired by other zines like Metal Mania, Metallic Overkill, Suck City, Sledgehammer Press and Guillotine, to name a few.  We featured interviews with groups like Cirith Ungol, Malice, Mercyful Fate, Hellcats, Bitches Sin, Manilla Road, Breaker, Starz and more. We wrote demo, album and concert reviews and plenty of playlists! Me and high school friend, Phil Baker, ended up doing three issues and then moved on to writing (if you could call it that) for the nationally distributed Aardschok America magazine, doing the crazy Graveyard Metal college radio show WKDI 1985 25 Track 2526 Track 26 12 Track 12WkdiIntro1testat WKDI in Dekalb, IL and of course, King Klassic Records.

From the beginning, the mission was about spreading the word about the music we liked. That has remained the cornerstone of everything I’ve done since this all started. It has been my strong passion for music that has kept me plugging away for over 25 years. Honestly, there have been a few moments over the years when all seemed lost that I would entertain the idea of walking away from all this, but the music itself and the inspiration of artists like Jordan Macarus, Billylee Janey and others has always kept me true. 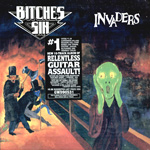 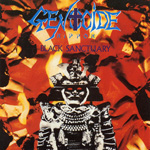 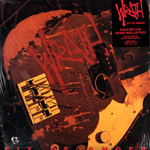 The King Klassic records label was hatched in 1985 via a pressing and distribution deal with Greenworld distribution. What originally started out as a compilation album project, quickly turned into a regular full fledged label. Under the King Klassic name were releases from Wrath, Bitches Sin, 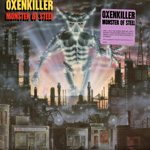 Hellcats (ex-Starz), Genocide (Nippon), Oxenkiller and lastly, our involvement with Solitude Aeturnus’ debut album. The Greenworld thing went sour after a few releases as they filed bankruptcy in some kinda underhanded scam with relatives at Enigma or so it appeared from the outside. It was a bad scene for all the labels involved, as all the master tapes, artwork and everything they had was locked up for years while the thing went through the legal system. Not long after this debacle, I struck a new deal with ILA (Independent Label Alliance) in New York, and I moved out there to pursue the whole thing and watch over it. However, this was another sort of strange deal that held us at the mercy of those calling the shots over at Important distribution. We did manage to get some kool releases out with ILA’s help though, so it was worth all the trouble. I had some great laughs with ILA owner Jim Reynolds, while in New York too. Getting

paid for anything was next to impossible in those days unless you were the distributor, though. I can safely say I never profited one dime from Greenworld or Important. Some bands may have the misconception that the label rode off with all the riches, but that’s what bands do, cuz they generally have no idea what goes on behind the scenes, at least in those days. Hell, I has having a hard time trying to make sense of the whole convoluted mess myself. I was working all kinds of crazy jobs and fighting tooth and nail to keep the dream alive. After all was said and done, I briefly relocated back to Illinois and then moved on to Texas, sort of by accident. We were actually attempting to relocate to Guadalajara, Mexico, but got hung up at the border and ended up staying in Texas! Who knows what would have happened had we made it to Guadalajara. Right around or just before this time, was the last King Klassic project, the Solitude Aeturnus “Into the Depths of Sorrow” album.  I put together this insane promo package with a cassette and a giant booklet of 11×17 pages filled with like at least 100 huge quotes about Solitude from every fanzine/magazine imaginable. So, instead of releasing it ourselves we shopped it around to every metal label that existed at the time until finally, Monte Conner at Roadrunner, decided to give it a green light. Solitude Aeturnus released their crushing debut album worldwide on Roadrunner and went on to rule the doom landscape for years, and remain one of the top bands in the genre. Around that same time, we also managed to unleash the short-lived (only one issue) Zoinks! fanzine that featured interviews with John Perez (Solitude Aeturnus), Paul Kratky (Slauter Xstroyes) and more. This one is really impossible to find. 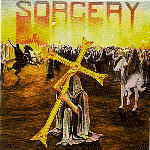 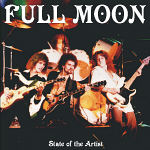 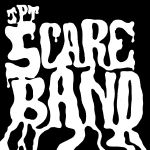 After a few years roasting in the sun in South Texas and loading up on all the records, the Monster Records label was getting off the ground. Probably inspired by the underground record collector scene with psych reissue labels like Rockadelic and others, it was decided that we’d press and distribute everything ourselves and cut out the middle men who were mucking things up. This would be a more homegrown thing and would build a direct line to the fans and the dealers, stores and distributors that would support this music. With Monster Records, I literally took everything into my own hands. I handled all the artwork, I learned how to work with audio mastering tools and did all the mastering in-house, handled artist relations, was in charge of all promotion, dealt with pressing plants directly, worked the phones, mail and email dealing with distributors, dealers and such, built and maintained our presence on the internet and whatever else needed to be done, this label was my baby. At the same time, I also put together, printed and distributed the extensive Rare Ass Records catalog, which, I admit, was influenced by the legendary Swedish store Record Heaven’s catalogs. Some of you out there will remember these catalogs for both the huge amount of rare records contained within and also the wild, unpretentious and outlandish descriptions. I can tell you we had a lot of laughs writing some of that stuff. This time, with Monster records, the vision was to release mainly 70s hard rock, 80s heavy metal and anything that bridged the gap between the two. Nobody was really doing this at the time, everyone doing reissues was consumed with the latest lost psych or “real people” find, so it seemed like an opportunity to fill a niche and satisfy our own personal tastes both at the same time. We started the ball rolling with Sorcery and Jpt Scare Band, then moved on to others like  Amulet, Full Moon, Survivor, Poobah, Legend and more. Some of these groups we’d been in pursuit of since the King Klassic days and after many years of not taking no for an answer we happily and proudly were able to release things like Winterhawk, Manilla Road and Slauter Xstroyes to name a few. It just didn’t make sense to give up on these until everyone could get a chance to hear this stuff that had been blowing us away for the past 10 to 15 years. 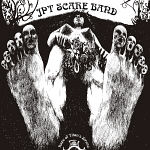 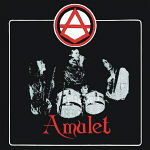 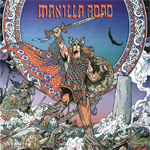 Suddenly, in 2005 the long-time Monster Records partnership ended, followed by the tragic untimely passing of a founding member. I picked up the pieces and started over once again with the Rockadrome label. I immediately set out to carry on what I had created with Monster Records, but my goal was to improve on it and take it even further. I kicked things off by opening up the Rockadrome online store, which was a marked improvement over what I had in place previously, and followed with new titles and represses of some of the classic Monster titles to get things back on track.