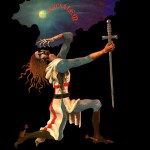 Jerusalem – Jerusalem CD. The first official reissue of this infamous metallic heavy rock album from 1972 produced by Deep Purple’s legendary frontman, Ian Gillan. The music is a menacing combination of over-the-top vocals and screaming lead guitars that could easily pass for something from the early 80s New Wave of British Heavy Metal scene, it’s that far ahead of it’s time. Originally released on the UK Deram/Decca label, and now a favorite among vinyl collectors, the album is presented here from the original master tapes and also features pre-album demos, alternate mixes and a non-lp single track. The 20-page color booklet contains liner notes written by bassist Paul Dean, lyrics, press clippings and rare photos! A must-have for fans of 70s hard rock and also the early 80s NWOBHM sound.

“Devoid of the showy theatrics of the day (’72) the band has a stripped down rough-hewn majesty that gives them a timelessness lacking in many of their contemporaries.” – Shindig! Mag (UK)

“All the songs are written by Jerusalem, and for a group so young they’re quite astounding.” – NME (1972)

“Not many bands really excite me. But this one’s so raw and completely unpretentious. They make the biggest bloody noise you can imagine, tempered with moments of extreme emotion” – Ian Gillan (Deep Purple)

“Excellent brittish heavyrock from 1972, production guidance from Deep Purple frontman Ian Gillan. The album is definitely a hardrocker in the same vein as Stray, Steamhammer and Samuel Prody also some of the more heavier german acts like NightSun, Message and Hairy Chapter, rough doomy and very dynamic. ” – GL Productions (http://hem.passagen.se/lillie/)