The long awaited 30th Anniversary Concert from New Wave of British Heavy Metal group LEGEND will be held at The Drift, Royal Yacht Hotel, St Helier, Jersey, United Kingdom on Saturday 25th February 2012. Doors open at 8pm. Arrive early to avoid disappointment. The gig will be recorded for a potential ‘live’ album and bonus DVD. There’s also a chance that a track or two will be played from the forthcoming album ‘The Dark Place’ which will be released towards the end of 2012.

The Legend – Anthology 2CD is still available on the Forged in Fire/Rockadrome label and contains the groups first and second album plus their EP and unreleased demos. It’s a must-have item for fans of great guitar driven hard and heavy rock and early New Wave of British Heavy Metal sounds. 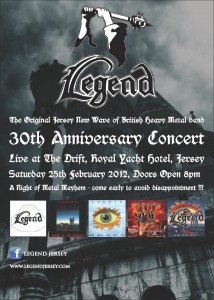 Militia – Released CD. Lose your old Militia demo tapes when your Mother or the old lady tossed out your shit? Here they are, the unearthed collection of 80s recordings from the legendary Texas underground […]

Anvil Chorus – The Killing Sun CD  Long anticipated release from legendary SF-bay area progressive metal band from the early 80s! Nearly 3 decades after the group’s formation and a couple years after their recent […]