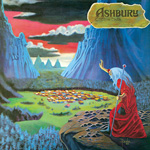 Ashbury – Endless Skies LP. Vinyl reissue of classic early 80s hard rock private press record from Arizona! A real gem for fans of classic hard rock like Jethro Tull and even 70s metal heads into such obscurities as Legend (From the Fjords) or southern rockers into groups like The Outlaws. Hypnotic vocal hooks and a mystical atmosphere mixing acoustic and electric guitars lures you right into this group’s unique hard rock sound. It’s amazing how such talent can slip right under the radar. These guys were buried treasure waiting to be unearthed when we made contact over 5 years ago and re-released their masterpiece “Endless Skies” on compact disc. Since that time, they have played Ragnarok festival in Chicago with great success and set off to Europe for two more festival shows! Here we bring you a near exact vinyl reissue of the legendary 1983 debut album that collectors scramble for, brilliantly re-mastered and including an informative lyric insert and color poster.

Hard rock ripper with progressive edge; been compared to Black Sabbath and Bill Nelson – The Acid Archives  (I think they mean a cross between the two)

“Some people are just good at certain things, just rule at something. Tom Brady at playing quarterback in the NFL, for instance. Sidney Crosby in hockey, as an example. Dennis Bergeron at coming up with amazing obscure hard rock. I mean, let’s face it, here’s a guy who (along with his late partner, Phil Baker) turned me onto: Winterhawk, Slauter Xstroyes, Full Moon, Sorcery, Manilla Road’s “Dreams Of Eschaton,” do I need to go on? Well, Dennis has done it again, this time hitting me right between the eyes with a little album that came out of Oklahoma in 1983. Now I’ve heard that the wind goes sweeping down the plain in Oklahoma, but the guitars must have too, and a couple guys named Randy & Rob Davis must’ve been standing there, waiting to catch ’em. They did and then they started to play like madmen (well, there’s a song on the album called “Madman,” so…) and came up with this absolute beaut of a record. There is really very little I can say about how good this damn thing is, from beginning to end. The songs are so good, the playing (Randy Davis – lead guitar) & singing (Rob Davis) so spectacular that you’re going back & hitting “repeat” to hear every single track again. So what does ASHBURY actually sound like? The best description I can think of is The Moody Blues songs & vocal melodies crossed with the hard rock riffs & leads of Full Moon (or for the obscure-challenged, Ritchie Blackmore, maybe). From the opening of “The Warning” through scorched-in-your-brain hook-laden jewels like “Twilight” & “Vengeance,” this album stands up with anything from the ’70’s, including all the big boys. You then finish up with the 7+ minute epic title cut and your face-to-face with an opus that finds it’s equal in Full Moon’s “Winter City” & Winterhawk’s “Period Of Change.” This is the real deal, kids, & it’s only a shame that ASHBURY never did a follow-up. Essential for any ’70’s hard rock fanatic!” – Chaos Realm

ULTRA  – Ultra CD. Classic Texas-style, foot stomping, bad-ass hard rock and roll from one of the founders of the legendary Texas psych/rock group, HOMER. 16 explosive twin lead-guitar filled cuts all digitally-remastered from the […]