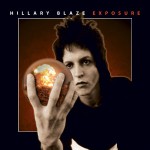 It all started during the psychedelic 1960s when Sandy Michael Napoli, Jimmy Tirella, Paul Logrande and Joe Arduino formed the pop rock band The Paper Garden, releasing an LP on the Musicor label entitled Paper Garden Presents in 1968. The group disbanded in the early 70s, and Napoli (now simply Sandy Michael), Logrande (following suit as Paul Gran), Tirella, and new member Mark Nowicki formed a dissimilar band which they christened Hillary Blaze. Along with the new name, came a new direction of theatrical-based performance and heavy metal sound, exemplified in what would become the album Exposure. Recorded and mastered during the summer of ‘76, Exposure was released in 1977 on their own 30th Century Fox label. Tirella departed shortly after, replaced by drummer John  Williams both in the band and on subsequent pressings of the LP’s cover (Williams contributed additional percussion during the album’s creation). Nowicki likewise left, and Gran took over on bass and Scott Dickson on guitar. Hillary Blaze developed an immense following in the southwest United States, eventually disbanding in the late 70s.

The spacey punk vibe, sizzling guitar and snotty vocals give the album a unique and ear-catching sound for it’s time. Re-discovered by music fans sometime in the 90s, the original vinyl pressings are rare as hen’s teeth and make a prized score for collectors. Remastered for compact disc from the original tapes, the sound is nothing short of killer! Play this one Loud! Enjoy another fine addition to Rockadrome’s Vintage label roster.