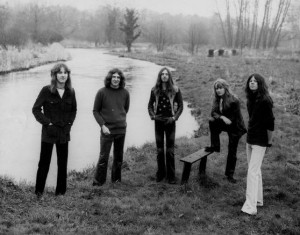 In the 5th form of St Probus School, Salisbury, Wiltshire, UK in 1966 there were 3 very good friends, Paul Dean, Ray Sparrow and Chris (Kef) Skelcher. A Canadian schoolfriend (Larry Taylor) one day brought in an album by a band called John Mayall and the Bluesbreakers who turned out to be an electric 12 bar blues band. This was something new for Paul, Ray and Chris and triggered something in all three. The music clubs at this time very much centred on the pure pop music of the time. By chance within a few weeks of hearing the album they saw that John Mayall was playing at a popular local venue called the Alexander Rooms. They decided to go see. What they didn’t know at the time was that this was the beginnings of the Blues Boom in the UK, which was about to launch some amazing bands onto the scene and would eventually lead to the beginnings of Rock and all its subsequent off-shoots.  For those who don’t know, John Mayall was responsible for much of what happened next in the music industry. The members of the Bluesbreakers over the years reads like a whose who of Rock Music.

Some of the leading bands of this boom in the UK were  John Mayall, Peter Greens Fleetwood Mac, Savoy Brown Blues Band, Chicken Shack, Alexis Korner, Keef Hartley Band, Graham Bond. Many other bands were coming through who initially believe it or not also started as Blues Bands e.g. Ten Years After, Taste (Rory Gallager)  Free,  Jethro Tull. In the USA there were bands like Canned Heat and Paul Butterfield.

Paul, Ray and Chris went to see JM and were completely wiped away. None of the 3 had any musical background, but the next day at school they decided to form a band. This was the beginning of the Jerusalem Story.

There was no particular decision about who would play what, it just seemed to sort itself out. Ray was always a foot-tapper in school, so it seemed a good idea for him to be the drummer. He then found a very cheap second-hand Olympic kit. Chris new someone with a dirt cheap electric guitar, so took the position of guitarist and Paul found a home made bass advertised in the local paper. The neck wasn’t exactly flat but it did toughen up his fingers very quickly! Paul decided to also take the vocals as it appeared at the time that 4 strings would not be as difficult as six or the drums (even though at junior school he had been marked as tone deaf in music. Maybe he still is as far as some people are concerned!). They also bought a cheap 30 watt amp, a couple of speakers and a mic. The finances for all this came from odd jobs, like watercress and wild oat picking, harvesting, window cleaning, piano moving literally anything was game. From day 1 they decided to never do covers versions, which considering their technical ability at the start, was a sensible decision. From then on every spare moment was spent learning to play, practising and listening to the blues. Not just contemporary, but all the old accoustic blues players from the USA.

Paul wrote the songs, which were all based around 12 bar blues and boogie. One of the first riffs he wrote was later to become ‘She Came A Bat From Hell’. Anyway, they plodded away for months until they had enough courage to play in public for the first time. This was just a small gathering of school friends and their German exchange students and was in a small hall at Salisbury College of Further Education. Much to their amazement it actually went quite well as many of the students had never heard Blues before. They also discovered that doing your own material has a distinct advantage, as no-one knows how the songs go, so the only person that hears the mistakes is the one who makes them! In fact Paul couldn’t remember half the words and made them up as he went along or repeated previous lines, (next time you see your favourite band live, check it out, even the best have to do it sometimes!). They continued like this until the level of musicianship improved. Just the odd small gig, but mostly practice. During the holidays they continued to do all kinds of work to buy better gear. Eventually they bought 2 Kelly 100 watt amps and a cabinet each.  Once they had finished their final exams, Paul went to Salisbury College of FE, Chris went to Bishop Wordsworth Grammar School (both to do A levels) and Ray went into the family grocery and post office business. They continued on their musical path, rehearsing everyday in the cellar of Rays parents business.

The Blues Boom was now evolving into the Rock Boom. Early pathfinders like Cream and Hendrix were being joined by new bands like Led Zeppelin, Black Sabbath, Deep Purple to name a few. Festivals were now a way of life like Woodstock, Isle of White 1 & 2, Bath Blues Festival which later became Shepton Mallet and eventually Reading Festival. Paul, Ray & Chris when not playing were out there enjoying the Rock revolution.