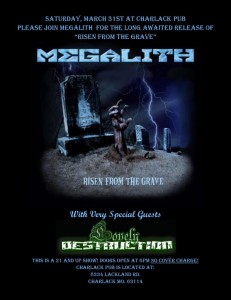 St. Louis power thrash metal band Megalith, whose debut album, “Risen from the Grave,” is being released by Rockadrome’s Forged in Fire label, is having a CD release show on March 31st at the Charlack Pub in Charlack, MO. The album documents some of the band’s 1986 demo material as well as a live concert recording from the night of lead singer and guitarist Joe Bufalo’s tragic death. Megalith joins Watchtower, Slauter Xstroyes, Militia, Manilla Road, Legend and more on Rockadrome’s Forged in Fire label, which specializes in unearthing and re-releasing 80s heavy metal.

Automag – Hellbound CD. A heavy metal freight train from North Carolina in the vein of COC, Clutch, Metallica and Black Label Society with a Southern twist on this concept album debut for the Rockadrome […]

SLAUTER XSTROYES – FREE THE BEAST CD This is not death metal. No, I have decided to deviate from my norm this week and present a highly underrated US power metal band by the name […]

Militia – Released CD. Lose your old Militia demo tapes when your Mother or the old lady tossed out your shit? Here they are, the unearthed collection of 80s recordings from the legendary Texas underground […]