Chicago area heavy metal band, Slauter Xstroyes, have begun recording their new album to be released later in 2012. The following footage is from their first visit to Fairview studios where they laid down tracks for two brand new songs. Guitarist Paul Kratky unleashes some massive riffs and searing solo work while vocalist Steve Reimer belts out the lyrics to the brand new track “Psycho Killer.”

The last time Slauter Xstroyes entered the studio to record an album it was 1987 and the resulting album, “Free the Beast”, was never fully completed and not officially released until the late 90s on compact disc. At this time, their sought after collector favorite 1985 debut album, “Winter Kill”, was also reissued on compact disc and vinyl. These releases further solidified the group’s underground cult following as word of the band and its unique music spread across Europe where they received favorable reviews from critics and fans alike. Despite the urging of friends and fans a sustained Slauter Xstroyes reunion was unfortunately not in the cards at this time. 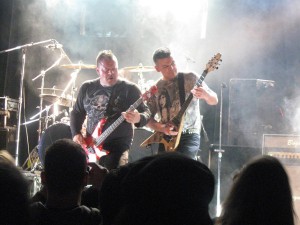 he clocks ahead another 10 years or so and Texas label, Rockadrome records, re-releases the “Free the Beast” and “Winter Kill” albums yet again on compact disc. This time around, founding members guitarist Paul Kratky and bassist Brent Sullivan decide it’s time to put the band back together and give it another go.  They recruit former drummer Rick Kroll and vocalist Steve Reimer and set about rehearsing. Word of the band’s possible reunion spreads and Greece’s “Up The Hammers” festival comes calling. After a few local shows they head out to Greece for a fantastic show in front of a packed to the gills club of rabid Greek metal fans. The show is a great success, so they head back to Chicago and start discussing the possibility of a new album and more shows in the Chicago area. Next up, Germany’s “Keep It True” festival recruits Slauter Xstroyes for an appearance. It’s another excellent show from Slauter Xstroyes and they amazingly end up being one of the very few bands ever called back up for an encore. It’s also at this time the “Free the Beast” album is properly reissued on double vinyl and sold out almost immediately. Slauter Xstroyes is officially back!

Near the end of 2011, the band ushered in new drummer John Ashe and became serious about rehearsing and writing for a new album to be released in 2012. Several brand new songs are slated for recording as well as some previously unreleased material from the 80s. Stay tuned for much more from Slauter Xstroyes!!!

Anvil Chorus – The Killing Sun CD  Long anticipated release from legendary SF-bay area progressive metal band from the early 80s! Nearly 3 decades after the group’s formation and a couple years after their recent […]