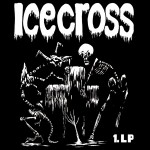 Icecross – 1 CD (ROCK051-V-2). 40th anniversary first official reissue of 1973 Icelandic hard rock underground monster that’s been the target of collectors for at least two decades! Carefully remastered for pristine sound that lays waste to all the bootlegs that have come before. 12-page booklet with liner notes, clippings and photographs. After several years of hounding band members we are very happy to finally be able to bring you the first official reissue of this legendary gem.

Icecross possess a unique dark sound which reveals influences ranging from Sabbath to Crimson to Blue Oyster Cult and beyond all melded together in such a way to form their distinct Icecross style. Considered proto-metal by many, though they don’t achieve this with a typical smash your face approach. Instead, Icecross unleash some killer inventive guitar sounds by way of Leslie speakers combined with ominous effected bass lines and splendid use of bow to create a perfect dark heavy guitar album. One of the few, if not the only, Icelandic band inspired by Sabbath at that time.

All tracks are self-composed and sung in English:

“Their album has been legendary among collectors for years. All in all this is an album of overwhelming power with an underlying, uncomfortably penetrating coldness. Obviously one for guitar lovers or those willing to delve into the more obscure history of heavy metal”  – Scented Gardens of the Mind

Oho – Okinawa CD. {BUY ME} Official reissue of this rare tripped-out progressive psychedelic rock private press record out of Baltimore circa 1974. This release features the entire original recording as it was meant to […]

Rockadrome is proud to announce the forthcoming vinyl reissue of GIFT’s 1972 debut album, originally released on the Telefunken label and now a sought after high dollar collectible. If you like other 70s German heavies […]