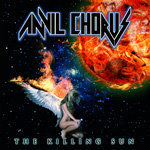 heyday, it’s destined to be the classic album everyone has long awaited from this magical group. Led by guitarist Thaen Rasmussen and vocalist/bassist Aaron Zimpel (who have also had roles in various bands such as Heathen, Metal Church, Vicious Rumors, Release and Control), the integrity of their original sound is fully maintained and should please anyone who has followed the band through the years or owned any of their heavily circulated demo tapes. A 12-page color booklet with liner notes written by San Francisco metal legend Ron Quintana (KUSF/Metal Mania), cover art by Mark Devito (Motorhead) and packed with lyrics and photos, completes this magnificent and much anticipated release.

Anvil Chorus. The name itself suggests something a little more than the typical hard rock band; something intelligent and complex, even sophisticated — and they were. Anvil Chorus made a thinking man’s metal. There was such a thing and it wasn’t thought of as a style, just good music that put some structure and challenge into a normally repetitive form. Clearly influenced by the prevailing titans of progressive rock and heavy metal of the day, Anvil Chorus was a fount of unique inspirations. A group of talented individuals, half of them multi-instrumentalists and all of them bringing to the table a creative flair. The composition, arrangement and melodic skills enjoyed a harmonic and contrapuntal implementation that was delivered crushingly… hugely. The sound was Big with a capital “B”. The guitar harmonies, keyboard wizardry and bottled-lightning rhythm section were a powerful collision. Heavy riffs, catchy melodies, belting vocals and a refined aesthetic completed the signature sound; Anvil Chorus, in the early 1980’s, rightly earned a buzz of their own for their unique and exquisite style, which to this day continues to be regarded as significant and influential.

Musicians featured on the recording include:

Slauter Xstroyes in the studio to record new album for 2012!

March 8, 2012 theblorg News Comments Off on Slauter Xstroyes in the studio to record new album for 2012!

Chicago area heavy metal band, Slauter Xstroyes, have begun recording their new album to be released later in 2012. The following footage is from their first visit to Fairview studios where they laid down tracks […]