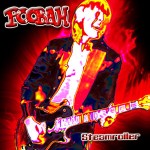 Poobah  – Steamroller CD. Reissue of classic late 70s underground hard rock album. Originally released in 1979 on the private Peppermint label, it is a top collector item sought by vinyl mongers around the world. After disco hit, many local hard rock bands imploded, but Poobah kept on churning out the heavy jams and laid down some legendary cuts here that demolish most other private pressings from that time. Experience this monster re-mastered from the original reels, complete with 12-page booklet containing an interview with guitarist Jim Gustafson, lyrics, photos, and 5 massive bonus non-Lp tracks!!! Come with Poobah and Jump Thru The Golden Ring!!

– “POOBAH records easily stand toe-to-toe with classic releases from UFO to JUDAS PRIEST to THIN LIZZY, and the band is still quite active today.” – Peacedogman.com

– “This 1979 release is is clearly a hard rock classic that has gone un-noticed in recent years. It’s a mixture of late 70’s metal (Riot, The Godz etc) and some late 70Â´s Psychedelic Rock like Randy Hansen and Frank Marino” – Freak Emporium

– “A completely over the top guitar-hero-hard-rock overload” – Shindig!

– “If you’re a fan of rock bands who light their guitar strings on fire with the friction of their whipping fingers across the frets, don’t miss this one. Poobah was, and remains, a legend, a gem, a true under-appreciated rock and roll hero.” – The Ripple Effect

Finally, we have some of our artist T-shirts becoming available over at the Rockadrome Store. Grab some now and show your support for Rockadrome and these great bands. At the moment, we have shirts available […]