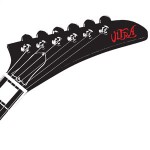 ULTRA  – Ultra CD. Classic Texas-style, foot stomping, bad-ass hard rock and roll from one of the founders of the legendary Texas psych/rock group, HOMER. 16 explosive twin lead-guitar filled cuts all digitally-remastered from the mid-70’s master recordings! Guitarist Galen Niles tears up the fretboard! Return to the days of classic hard rock done the way it was meant to be!! Don’t miss it!! Some of these tracks were originally released on a very rare limited edition demo Lp (only 100 copies!) back in 1978! This compilation was previously released on the Monster Records label, now it’s repackaged and finally back in print on the Vintage (Rockadrome) label.

– “this is sun-kissed heavy Southern rock, the twin guitars of Galen Niles and Larry McGuffin (you can’t make names like that up!) wrestling and racing like alcofuelled bikers at a truckstop diner where Thin Lizzy and Blackfoot are on permanent jukebox repeat.” – Terrorizer Magazine (UK)

– “Try to imagine if you can Wishbone Ash with two Ted Nugents on lead guitars ! Fantastic !” – Freak Emporium

– “If you like awesome ’70’s hard rock with dual lead guitars, throaty vocals and killer production, this one is for you..” – Chaos Realm

Poobah  – Steamroller CD. Reissue of classic late 70s underground hard rock album. Originally released in 1979 on the private Peppermint label, it is a top collector item sought by vinyl mongers around the world. […]