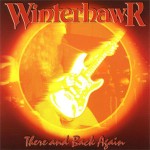 Winterhawk  – There and Back Again CD. Before they regrouped to record their timeless classic “Revival” album in 1982 they were stunning audiences during their late 70s prime opening shows for acts like Budgie, Black Oak Arkansas, Steppenwolf and others. We struck gold when we unearthed this wonderful 1978 recording of Winterhawk at their peak during a headlining gig at Chicago’s infamous Aragon Ballroom! You’ll hear guitarist Jordan Macarus at the top of his game, dealing out endless mounds of mindblowing fretwork! Revealed for the first time in over 20 years are massive Winterhawk classics like “Off the Bat,” “There and Back Again,” “Creatures of the Sea,” “In the Wake of Things Yet To Come” and more!! We’ve also included a couple rare early demos as a bonus! A must have CD for fans of classic 70s hard rock and groups like Thin Lizzy, Rush, UFO, Wishbone Ash, Blue Oyster Cult, Mahogany Rush, Kansas and more!!

– “For those of you un-enlightened to the guitar talents of Jordan Macarus, this live CD will be a revelation for you. The guitar work is stunning, the songs are perfect and bring to mind the twin lead stylings of Wishbone Ash and even in parts reminds of a what a 70’s version Iron Maiden might have been” – (Shroom Records)

Jerusalem – Jerusalem LP. Gate-fold cover vinyl reissue of infamous 1972 UK heavy rock monster produced by Ian Gillan, originally released on the Deram/Decca label. Requests have been pouring in for vinyl version of this […]