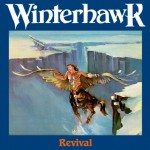 – “You can bet your bottom dollar that somewhere at the opposite end of the Time Tunnel, Winterhawk’s seven-minute piece de resistance Period of Change is more revered than Kansas’s Dust in The Wind, and Macarus is playing in Deep Purple instead of Steve Morse. Seriously, Winterhawk are that good.” – Geoff Barton (Classic Rock)

– “If I could take any single record with me to a desert island, this would be it.” – Enlightened Chaos

– “…midwest hardrock band whose melodic hardrock is some of the best we’ve heard; great guitar leads and songs in a Jeronimo-Jericho-Masters
zone;” – Subliminal Sounds

– “A music torrent bursts out full of imposing,extra terrestial,destructive solos that will lead you to the greatest orgasm you ever had..” – Steel Conjuring

– “In my past twenty years as an addict of heavy guitar music, I have never heard anyone who played the electric guitar like Jordan Macarus. The three songs that Macarus wrote on his own in 1979 (“Period of change”, “Revival” and “Free to live”) I shall take with me into my grave, because I don’t think I will ever hear anything like that again even in the afterlife.” – Sacred Metal

CFM – Face in the Mirror CD. Jordan Macarus, known for his role as guitarist and driving force behind the hard rock group Winterhawk, has arrived with a new 12 song CD that is a […]