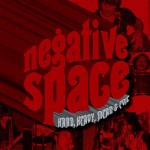 “In the late 60’s Negative Space was a powerful force in the heavy rock emanating from the East Coast. Fronted by Rob Russen, with his Cherry red Gibson SG, Baldwin Exterminator amplifier and fuzztone and supported by Jim Moy on guitar and vocals, Bob Rittner on bass and vocals and drummer Lou Nunziata”