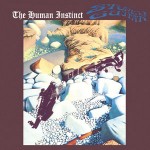 “Maori guitarist Billy TK was the Jimi Hendrix of the Southern Hemisphere. He obviously took the lessons of the Master to heart and, on his albums with Human Instinct, took Hendrix’s psychedelic approach to absurd new extremes. Not necessarily the greatest listening experience, but definitely the farthest “out” of any guitar psyche you’re likely to ever hear. This album is one of the most important chapters of rock from that era. “

June 2, 2011 theblorg In the Press Comments Off on Jerusalem interview on It’s Psychedelic Baby blog