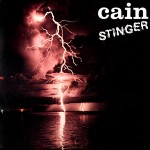 Cain – Stinger CD. Reissue of this Minnesota based classic hard rock band’s 2nd album, originally released in 1977 on the Asi label. This is the follow up to their previously reissued and very popular “Pound of Flesh” album from 1975, known for it’s pure classic hard rock sounds and controversial cover art. This powerful sophomore outing features frontman Jiggs Lee taking his vocals talents to new heights with the ever present guitar of Lloyd Forsberg remaining as forceful as ever. The band was recently inducted into the Mid-America Music Hall of Fame on September 17th, 2010 and performed a short live set at the ceremony. This was the first time they’d re-assembled as CAIN in nearly 20 years or so. Their reformation was well received and they’ve continued to play various gigs in the region since the induction. As a bonus, we’ve included never-before-released Cain live tracks, recorded around the time of Stinger’s original release.

1. FreedomCain_-_Freedom
2. Welcome to the Dance
3. Gimme Some Lovin
4. The Minstrel Song
5. All I Need is YouCain_-_All_I_Need_Is_You
6. Harmony With One Voice
7. Leave It All Behind
8. Thanks Alot Houston
9. Stinger

Double album vinyl release featuring previously unreleased Truth and Janey captured live in 1974 from a series of shows in Topeka, Kansas. Early stuff from the classic line-up with some great extended jamming. Never before […]

Iowa’s legendary rock guitarist is back again! This time around, it’s a full throttle non-stop barrage of down and dirty smoldering heavy blues rock guitar licks that just keep coming at you from start to finish. […]