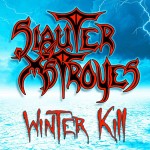 Slauter Xstroyes – Winter Kill CD. Reissue of absolutely wicked 1985 heavy metal vinyl ultra-rarity and collector holy grail from Chicago. An underground cult favorite because of the crushing monsterous guitar of Paul Kratky and thunderous bass from Brent Sullivan which battle to the death in an onslaught of massive power metal riffs and ripping leads. Singer John Stewart’s vocals are so powerful and commanding that nothing holds him back as he howls and growls through each majestic epic. One of my favorite heavy metal albums of all-time and one of the most talented heavy metal bands you’ll ever hear. These guys should have conquered the world! Brand new 12-page expanded booklet with liner notes, photos and lyrics! Enhanced CD format includes bonus concert video track from 1985!

plus bonus live video track from 1985!

Mary Butterworth LP (1969) reissue now available! Travel back in time to 1969 with our official limited edition vinyl reissue of one of the most highly sought after west coast psychedelic rock records ever recorded. […]