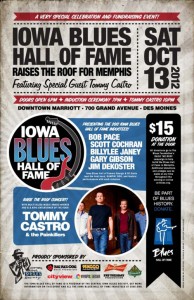 Founded in 1999, the Iowa Blues Hall of Fame mission is to recognize and honor the Iowa Blues heritage. This year one of the inductees includes Rockadrome label recording artist Billylee Janey. BillyLee is well known among label followers, record collectors and guitar players for heading up the classic 70s hard rock group, Truth and Janey. The Vintage arm of the label has reissued Truth and Janey’s collector favorite 1976 debut album on both CD and LP as well has classic concert recordings from the era. Janey has also released four top shelf classic rock and blues solo albums on the Rockadrome label, the latest being last year’s “No Saints Ringin’ the Bells”.

You can find more information about the fundraiser, other performing artists and further event information here: http://cibs.org/2012/09/iowa-blues-hall-of-fame-raises-the-roof-for-memphis/

Legendary Iowa Rock Hall of Fame guitarist Billylee Janey has been bending strings since the late 60s and released his first single in the early 70s with his hard rock band, Truth and Janey. Since, […]