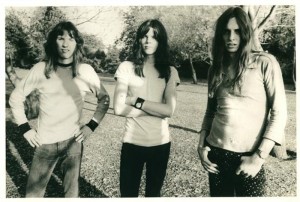 PUSSY are in no way a new band. They are actually pretty much as old as I am, if not older. That apart I had not even heard of them until I came upon them on MySpace. With a name like PUSSY I knew I had to interview them. Anders Ekdahl ©2012 for BattleHelm.com  The following in a excerpt, the whole interview can be found here.

To me Jerusalem and in the extension Pussy were completely unheard of. The only Jerusalem I knew of was the Swedish one. Give all of us infidels a brief run through?

-The Swedish Jerusalem appeared about 3 years after we disbanded and were basically a Christian Rock Band. Our Jerusalem, although in the midst of what was then Heavy Rock, was very different from the mainstream rock bands. What people say now is that we were years before out time, we were playing a form of Metal, Doom, Stoner etc., years before they became recognised/successful genres. We played throughout the UK and parts of Europe, mainly Germany and the large Rock Festivals in Europe. Most of the press and the public at the time did not really understand what we were doing, which is why to an extent we became more of a cult band with very little media exposure.   The album did quite well on release even in areas we had never played e.g. Japan. It was simply a band that appeared before its time. It is only in the last few years that many people have now recognised what we were doing and that in a way we were one of the pathfinders for certain future genres. After Ray and I decided that Jerusalem had achieved what we wanted and that to continue would have meant compromise, we decided to stop. By then the music business was being taken over by lawyers and accountants, so to be different was no longer viable or acceptable. We then formed the 3 piece Pussy, which in a way was a poke in the eye at what was going on in the business, but it was still very much a serious band with a direction. I would describe it as a goodtime kickass dirty hard rock band. This obviously didn’t go down well with the industry, but we still achieved what we wanted to a point and once again it became more of a cult band than commercial. The single ‘Feline Woman’ was unofficially banned by the BBC and therefore no record company would touch the album. As you probably know, the Pussy album has now been released worldwide on Rockadrome Records for the first time ever. The amazing thing is that it seems to be appealing to people across all genres, not just rock.

With a name like Pussy and in the time the band operated must have stirred up some controversy. What kind of reactions did the name bring with it?

-Yes, it was a bit brave at the time and in fact is still quite controversial. At the end of the day the word Pussy has numerous connotations all over the World, so it can mean whatever you choose it too. In one way it helped because we were different, but once again made things difficult with the media and music business. Maybe our timing was a little out once again because very shortly the business and media were torn to pieces by the Punk explosion. Thank goodness. Anyway, the album is finally out after all these years, which is great.