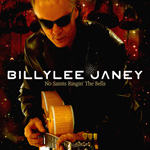 Billylee Janey – No Saints Ringin’ the Bells CD. Latest 2011 classic rock and blues guitar release from legendary Iowa Rock Hall of Fame guitarist who has been bending strings since the late 60s and released his first single in the early 70s with his hard rock band, Truth and Janey. Billylee stretches out here with a wonderful collection of 17 tracks including several extended jams and an enduring variety of songs that even further showcase his tremendous talent and style. This is his fourth solo release for the Rockadrome label and another strong album that anyone and everyone who digs classic rock guitar and blues should be checking out.  In fact, I’ve found it impossible to choose a favorite, I figure the only way is to put together a Best of Billylee Janey release! Listen to samples from the upcoming release here.

Double album vinyl release featuring previously unreleased Truth and Janey captured live in 1974 from a series of shows in Topeka, Kansas. Early stuff from the classic line-up with some great extended jamming. Never before […]