The latest batch of releases from the Rockadrome label are now available! For you vinyl lovers, we have the highly anticipated vinyl reissue of the classic 1972 UK hard rock album from Jerusalem. On compact disc, we bring you the first-ever reissue of late 70s sci-fi proto-metal rock private press from Hillary Blaze as well as a new revised release of the 70s epic rock metal sounds of rare early 80s recordings from Manilla Road.  Acid psych heads will be sure to enjoy the brand new release from Texas’ own Liquid Sound Company, featuring Solitude Aeturnus guitarist John Perez. You can pick them all up now over at the Rockadrome store, just steer your browser to www.rockadromestore.com

New expanded release with 16-page full color booklet with lyrics, liner notes, more photos and a 4×4 color sticker featuring the lost 1981 2nd album demo recordings from one of the most unique U.S. metal bands ever! After three decades the original demo masters, of what was to become the group’s magnificent 2nd album “Dreams of Eschaton,” have been unearthed and restored for this single compact disc release!! Included here are the massive 9+ minute epics “Mark of the Beast,” “The Avatar,” and “Triumvirate” among other all-time Manilla Road classics like “Time Trap” and “Venusian Sea.” This release contains some of Mark Shelton’s finest guitar and vocal work and bridges the gap between their 70s metal/rock roots and their 80s signature epic metal sound! Featuring artwork by legendary Thin Lizzy artist Jim Fitzpatrick! Order here!

Gate-fold cover vinyl reissue of stunning 1972 UK heavy rock monster produced by Ian Gillan, originally released on the Deram/Decca label. Requests have been pouring in for vinyl version of this classic and now it has finally arrived! High quality gate-fold cover near-exact reissue, right down to the labels, of this illustrious collector favorite and downright savage early 70s proto-metal hard rock beast of an album. Remastered for vinyl direct from the original master tapes. Includes insert with liner notes and photos. Lyrics are inside gate-fold cover. File this under “must-have” reissue right alongside Truth and Janey’s No Rest for the Wicked Lp! Another collaboration release with Lion Productions. Upcoming vinyl reissues include Mary Butterworth, Heaven & Earth, Sainte Anthony’s Fyre, After Shave, Negative Space, Search Party and many more! Order here!

Official reissue of sought after 1977 metallic sci-fi hard rock private press record, featuring ex-members of the psychedelic 60s group Paper Garden. Available again for the first time in over 30 years! Recorded and mastered during the summer of ‘76, Exposure was originally released in 1977 on their own 30th Century Fox label. Music fans re-discovered this gem sometime in the 90s and the original pressing has since become a record collector prize. The spacey punk vibe, sizzling guitar and snotty vocals give the album a unique and ear-catching sound for it’s time. Remastered for compact disc from the original tapes, the resulting sound is nothing short of killer! Play this one Loud! Enjoy another fine addition to Rockadrome’s Vintage label catalog. Order here! 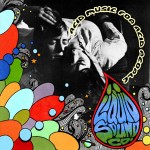 Third album from Texas acid psych heads led by guitarist and doom guru John Perez (Solitude Aeturnus). Acid Music for Acid People is a culmination of newer studio recordings coupled with very rare live and demo recordings. Totally disregarding any trends in psychedelic or other forms of music, the band stretches out and produces a soothing and at times intense, mind altering stew fit for cosmic travels and massive mind meandering. Approaching these recordings with a direct line to higher key realms, Acid Music finds our favorite long-running unknown Texas band keeping it simple with little or no overdubs, wrenching out a pure and raw connection to the psychedelic properties of the music. Sit back, fire up the lava lamps, pop those tabs and get ready to transport! Order here!