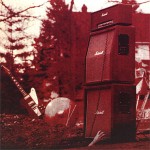 Since the release of “No Rest for the Wicked’s” in 1976, it’s stature among collectors of 60’s and 70’s hard rock and psychedelia has grown steadily over the years, with original copies now fetching a large sum in the collector’s market. It has often been lauded as perhaps the best independent U.S. heavy rock release of the entire 1970’s. Official release date set for December 21st! But we’ll ship ’em as soon as they arrive. Pre-order now!

This release is the first in a series of vinyl reissues from a new collaboration between Rockadrome’s Vintage label and Lion Productions. Other upcoming vinyl releases include Jerusalem, Mary Butterworth, Sainte Anthony’s Fyre and more!