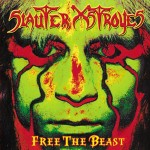 This is not death metal.

No, I have decided to deviate from my norm this week and present a highly underrated US power metal band by the name of Slauter Xstroyes.  Fromed in 1979, this band is older than many of the famous greats we know today, but unfortunately, Slauter Xstroyes have remained in relative obscurity despite releasing two fine albums. Free the Beast is the last album they made, with it being half-completed in 1987, then abandoned and eventually released with some demos tagged on in 1998. That description might make this album sound incomplete, and in a sense it is.  Only the first six tracks are “album ready,” but holy hell, they sound fucking crisp.  Yes, “crisp.”  Slauter Xstroyes play an oddly progressive style of US power metal with lots of odd riffs, awesome basslines, and rather falsetto-happy vocalist, and it sounds amazing here.  Seriously, if this album was completed, it would’ve been a landmark in underground metal, and possibly the stepping stone towards a classic metal album.

The guitar work here simply cannot be understated.  The riffs are ballsy, heavy, and they work in tandem very well with both the bass and the vocals.  Also, the way these riff transition is pretty awesome as well–instead of smooth transitions, they’re often abrupt and very noticeable.  The faster ones in songs like ‘Blood in the Streets’ actually remind me of a slightly more straightforward Atheist, which is certainly quite the compliment.  The guitar wizardry doesn’t stop there, however, as the solos and dual guitar harmonies work very well here.  More often than not, there is no riff under a solo, which makes them all sound rather improvised, especially with the frantic bass underneath.  That gives this a nicely progressive feel (as if everything else here didn’t do that enough already).  I just can’t say enough positive things about these guitars…

Despite the presence of such good guitar work, the bass playing on Free the Beast is masterful.  It’s incredibly audible, and most of the time is central to the development of a particular passage in a song.  While adding an intricate layer of grooviness, the bass also gives the music a very nice textured feeling.  The technicality here can’t be ignored either, with such parts like the one from 1:09-1:18 in ‘Wicked Bitch’ being unheard of at this time in metal.  Once again, I think I should use an Atheist comparison here, because that’s the only relatively popular band at this time that really wrote their songs around the bass like Slauter Xstroyes did.  There are certainly more melodic tendencies here than in the thrashy death metal of Piece of Time, but this is still pretty chaotic nonetheless.

The drums are oddly progressive for any for of power metal, let alone power metal in the 1980s.  They compliment everything well, yet are technical enough that it’s obvious that they weren’t just thrown in the background to just keep time.  There’s no Portnoy-esque drum wankery, but there are quite a lot of random time changes and intricate fills to satiate the desires of any percussively inclined metal fan.

The vocals are likely going to be the sticking point of new listeners.  If you like King Diamond and/or Mercyful Fate, consider this a ballsier form of that.  The vocals are certainly gritty and ballsy, but also have a tendency to resort of falsetto range a bit too often if you ask me.  Still, they’re damn good and really compliment the music exceptionally well.  This style actually lends itself quite well to expressing a lot of emotion, such as in the verses of ‘NSZ 190.’  Something about the delivery and emphasis really works in their favor, and overall, I fucking love it.  If you like emotional, clean, ballsy vocals, you should like these.

I have no clue if the finished tracks were produced in 1987 or 1998, but either way, the sound is incredibly clear.  This is very important for a progressively-influenced recording in my opinion, so that also gives this album extra points in my book.

The demos show just as much potential as the rest of the album, and it’s a fucking shame that they were never made into album-ready tracks.  Even with the raw sound of these demos, there is so much potential found here.  Just fucking listen to that scream at 4:08 in ‘Metal’s No Sin’ and tell me that this wouldn’t have been fucking awesome if it was ever given the chance to be recorded correctly!  There’s even a pleasantly enjoyable instrumental, ‘E Pluribus Unum,’ that sounds better than stuff recorded years later by much more well known bands.

It’s a pity that this album never got the justice it deserved.  Not only is it obscure as hell (ok, the unpronounceable nature of their name doesn’t help them here…), but it wasn’t even finished correctly.  Still, this could have been a classic, or at least a stepping stone on the path on a classic.  I can enjoy this for the first six tracks alone, or I can enjoy the demos.  Either way, there is still a ton of quality music to be found here.

On an unrelated note, I found this used for $2 in a Newbury Comics store in Boston.  Used records fucking rock.